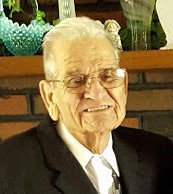 Obituary of Floyd A. Behme

Floyd graduated from Carlinville High School with the class of 1948.

Floyd soon entered the Army in 1951 and served during the Korean War. He served in the "Big Red 1" and his task was to haul dynamite and demolish bridges.

Floyd spent his career farming and trucking. He trucked for Wal-Mart from 1985 and retired in 2004, a job he truly loved. His passion was vegetable gardening, flower gardening, reading, and spending time with his grandchildren. After retirement Floyd farmed for Rhodes Farms in Carlinville.

Burial will be at a later date with private family services to be held.

Memorials may be made to Alzheimer Foundation.

Share Your Memory of
Floyd
Upload Your Memory View All Memories
Be the first to upload a memory!
Share A Memory
Send Flowers