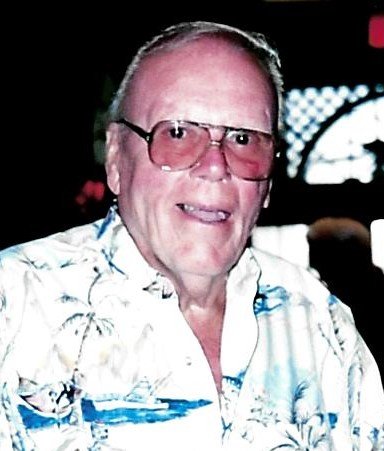 Daniel M. Millard, 94, of Carlinville, passed away peacefully on Monday, May 3rd, at Carlinville Area Hospital. Dan was born October 13, 1926, in Piqua, OH, to Christopher and Kathleen (McShane) Millard. Like many from the Greatest Generation, Dan spoke little about his past but left his family with a couple short stories about his childhood that are now cherished memories. His family lost everything during the Great Depression and were forced to move into New York City’s “Tent City”. Dan’s father was a hat salesman trying to make ends meet while he and his brother helped make “root beer” in the bath tub – which he later in life realized was bathtub Gin. Dan lived in 18 different places before he was old enough to enlist in the Army, and even then, his mother falsified his birth records so Dan could enlist at 17 years old. He served his country proudly in WWII in the Pacific Theater where he was one of the only people permitted to hand deliver messages from Washington to General MacArthur. As the war progressed, Dan became a foot soldier serving in Luzon, the Philippines, and was then one of the first Americans sent into Hiroshima, seeing first hand at the age of 18 the first use and devastation of the atomic bomb. Dan met Shirley Giacomini after the war as he walked past a bank in St. Louis and saw a young teller working inside that caught his eye. He walked right inside and asked her on a date and the two married in St. Louis on November 23, 1950. They moved to West Virginia where Dan worked for Valley Steel, pulling up oil pipes and knocking down oil derricks with teams of donkeys. Dan was promoted to foreman of Valley Steel in Carlinville, but years later would disagree with management and walk out, taking several employees with him, to start his own steel business. Dan started Central Illinois Steel Company in 1967 with the help of Bob Maguire, one shear, a tarp, and a light post. Dan loved hearing the sound of “steel chop” and treated his employees like family. True to the man who said little but spoke volumes, Dan’s last wish as God took him home to be with his Shirley Mae was simply “I just want a beer.” Private family funeral services will be conducted at SS Mary and Joseph Catholic Church in Carlinville on Friday, May, 7. Dan is survived by his daughter, Patricia (Phillippe) de Forcrand of Switzerland, and his boys, Daniel C. (Cathy) Millard of Guntersville, AL, Mark (Liz) Millard of Guntersville, AL, Tim (Susan) Millard of Carlinville, Chris (Michelle) Millard of Carlinville, 9 grandchildren, and 7 great-grandchildren. In lieu of flowers, memorials are suggested to SS Mary and Joseph Church or Carlinville Area Hospital.
To plant a tree in memory of Dan Millard, please visit Tribute Store
Services for Dan Millard
There are no events scheduled. You can still show your support by planting a tree in memory of Dan Millard.
Visit the Tribute Store
Share A Memory
Plant a Tree