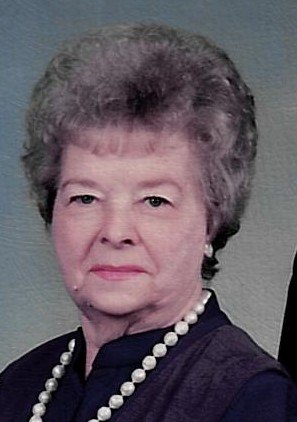 Norma (Moore) Schroeder, 93, of Carlinville, passed away on January 10, 2021 at Heritage Health Care in Carlinville, IL with her family at her side. She was born on January 26, 1927 in Carlinville, the only child of Dr. William G. Moore and Lydia (Kuester) Moore. When she was quite young the family moved to Edwardsville where she attended the Edwardsville Elementary and Junior High School. After the death of her father, Norma and her mother returned to Carlinville. Norma graduated from the Carlinville Community High School with the class of 1945. Norma met Andrew "Andy" Schroeder shortly after he returned from the service in Europe during World War II. It was love at first sight and after a whirlwind courtship they were married on October 30, 1946 in Edwardsville, IL. They became the parents of two sons, Drew and Kurt. Norma was a "stay at home" wife and mother, a career she often said she loved. She enjoyed spending time with family and friends, long rides in the country, working games and puzzles and was an avid reader. Norma enjoyed her time spent in the kitchen. Some of the dishes the family enjoyed were her macaroni and cheese, potato pancakes and frozen lime pie. Norma was a Cub Scout leader and attended and taught Sunday School at St. Paul's United Church of Christ. Norma is survived by her beloved husband of 74 years, Andrew Schroeder of Carlinville, IL; two sons, Drew (Connie) Schroeder of Carlinville, IL and Kurt (Jennifer) Schroeder of Shiloh, IL; two granddaughters, Stephanie Schroeder Duncan of Carlinville, IL and Kaitlin Schroeder of Shiloh, IL; grandson, Dr. Andrew Schroeder of Memphis, TN; great-grandson, Myles Duncan of Carlinville, IL; step grandchildren, Courtney Boznos of Bloomington, IL and Christian Tieman of Troy, IL; step great-granddaughter, Everleigh Boznos of Bloomington, IL; two nephews, Mike Soutar of PalosVerdes, CA, and Jon Soutar of Barstow, CA. Norma was preceded in death by her parents. Private family services will be conducted on Wednesday, January 13, 2021 at Davis-Anderson Funeral Home in Carlinville. Burial will follow at Mayfield Memorial Park Cemetery, Carlinville. Memorials are suggested to Carlinville School Milk Fund, Carlinville Food Pantry or donor's choice. Davis-Anderson Funeral Home, Carlinville is in charge of arrangements.
To send flowers to the family or plant a tree in memory of Norma Schroeder, please visit Tribute Store

Share Your Memory of
Norma
Upload Your Memory View All Memories
Be the first to upload a memory!
Share A Memory
Send Flowers