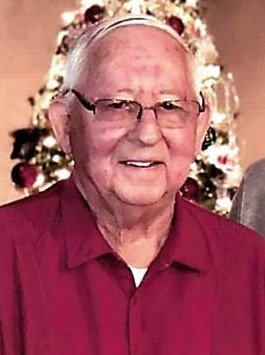 Robert E. "Dundee" Trakinat, 88 of Carlinville, passed away Friday afternoon, July 10, 2020, at Carlinville Area Hospital in Carlinville, IL. Robert was born June 2, 1932, in Carlinville, IL, a son of Frank and Anna (Shimkus) Trakinat. Dundee graduated from Carlinville High School with the class of 1950. After graduation Bob join the United States Air Force and served from 1951-1955. He married Melba Hacke, July 27, 1956 at the Zion Lutheran Church in Carlinville. Melba passed away August 17, 2002. Robert barbered for 35 years and retired from barbering in 1982. He then worked at the Carlinville Post Office as a clerk until 1991. He enjoyed traveling throughout his life including several trips abroad. He will be remembered for his unending wit, generosity, his genuine appreciation of a colorful spring flower, or his uncanny ability to possess a "don't worry, it'll get better" attitude. To simply say that he will be missed beyond measure would be an understatement. His memory will live on in the hearts of those who knew him and we will be forever be grateful that he was ours. He was a member of the Zion Lutheran Church in Carlinville and the Guy Baird American Legion Post #554. Robert was preceded in death by his parents, wife, grandson, Tyler Robert Enslow, a brother and six sisters. Funeral Services will be conducted at 11:00 am, Tuesday, July 14, 2020 at Zion Lutheran Church, Carlinville with Rev. Timothy Wilcoxen officiating. Burial will follow in Mayfield Memorial Park Cemetery, Carlinville with the Guy Baird American Legion Post providing veteran services. Robert is survived by his daughter, Debra (Kirby) Black of Carlinville, daughter, Toni (Mark) Enslow of Girard, IL, son, Michael (Jean) Trakinat of Hawaii, grandchildren; Mark J. (Abby) Enslow, Trig Birk, Tyson (Lacey) Birk, Alyssa Birk and Shelby Enslow, great grandchildren; Brayden, Brycen, and Braxtyn Enslow, Isabella and Amelia Birk. Memorials may be made to Zion Lutheran Church orCarlinville Area Hospital. Davis-Anderson Funeral Home, Carlinville is in charge of arrangements.
To send flowers to the family or plant a tree in memory of Robert Trakinat, please visit Tribute Store
Tuesday
14
July

Share Your Memory of
Robert
Upload Your Memory View All Memories
Be the first to upload a memory!
Share A Memory
Send Flowers