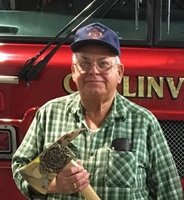 Wesley E. "Wes" Loveless, 79, of Carlinville, passed away Saturday evening, January 23, 2021 at St. John's Hospital in Springfield, IL. Wesley was born on July 27, 1941 to Richard Earl and Iva Rose (Behme) Loveless in Carlinville, IL. Wes graduated from Carlinville High School with the class of 1958. He served his country in the US Army during the Vietnam War, obtaining the rank of Corporal. Wes had numerous occupations and interest over his lifetime, always serving his community. He was the owner of Wes' Dairy Bar in Carlinville and was a delivery man for Starr Brothers Falstaff. He was a past deputy and dispatcher for the Macoupin County Sheriff's department and also a past Macoupin County Coroner. Wes was a part-time school bus driver and later a custodian for Carlinville Community Unit School District #1. He stood and greeted kids every single morning and shared his passion for Garfield the cat. Wes received the Golden Apple from the school district to honor his service. He also received the Illinois Custodian of the Year award. Wes carried his custodial work further, and worked for MandM Service Company and Farm Credit Services of Illinois, both in Carlinville. Wes was a former alderman for the city of Carlinville and past board member of the Macoupin County Historical Society. He was a member of BPOE 1412, American Legion Guy Baird Post 554, where he served as a past commander, VFW, Macoupin County Tractor Association, and Macoupin County Blacksmith Association. Wes was a lifelong member of the Macoupin Club in Carlinville and a member of Chapter 15 International Tractor Association. He also was on the Civil War Reenactment team. Wes' passion was the fire department where he was a Captain and dispatcher. Wesley joined the Carlinville Volunteer Fire Department in 1967. He had seen many changes, including the department changing to a Fire District. Wes loved and cared for his community greatly. Wesley is survived by his brother, Jerel "Jerry" (Marilyn) Loveless, Sr. of Carlinville, IL; uncle, Carl Behme of Carlinville, IL; aunt, Verna Knudson of Carlinville, IL; several nieces and nephews. Wesley was preceded in death by his parents, Richard Earl and Iva Rose Loveless, and brother, Wendell Loveless. Visitation will be a drive-by visitation on Thursday, January 28, 2021, from 10:30 am - 1:30 pm at the Carlinville Fire House, located at 317 West Second South in Carlinville, IL. People are asked to enter thru the back of the firehouse off of Cherry Street. the family asks that you please do not exit your vehicle A graveside funeral service will be held on Thursday, January 28, 2021, at 2:00 pm at Mayfield Memorial Park Cemetery, Carlinville, IL, with Rev. Cliff Woodman, officiating. Memorials are suggested to the Carlinville Fire District or the Macoupin County Historical Society.